We got a third successful cannon net catch under our belts at the weekend, we caught 50 Oystercatchers and a Bar-tailed Godwit. Three of the Oystercatchers were already colour-ringed, and we colour ringed the remaining 47. 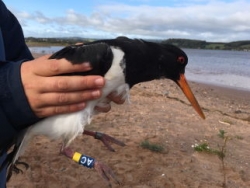 Colour-ringed Oystercatcher 'AC'A further 10 adult Oystercatchers were fitted with GPS tags, which is fantastic and will hopefully generate a lot of useful data over the coming winters. We had hoped for a catch of around 200 birds, which would have given us a good chance of catching enough juveniles to be able to GPS tag a sample of this years birds. However, the tide did not reach its expected height which gave the birds other roost options away from the selected catch area, so we did well to take any catch in the circumstances. As we didn’t catch any juveniles, we held back 10 tags to deploy when hopefully we catch some during mist netting sessions.

We'd like to thank everyone involved in making the catch happen, with huge thanks to Ryan Burrell for all his hard work in organising the catch. A massive thank you is due to Robin Ward, the cannon net licence holder who led the catch, especially after he and Judith arrived so late on Thursday night from Cambridge and then up early for the recconnaisance on Friday. Many thanks also Andrew Hoodless, who with Chris Heward, fitted the GPS tags, and to Lizzie Grayshon the other folks at GWCT – without whose support the GPS tagging just would not be possible. I would also like to thank Pete Potts and the Farlington Ringing Group for loan of kit again, and Ruth Croger for making the droppers so quickly after the Wader Study Group conference. I know people travel a long way so thanks to Lucy Hawkes and Nik Ward for hosting members of the team.

Thanks also to the Teignbridge Ranger Team (Phil, Steve and Stephen) for all the help and support and loaning the group 14 pairs of waders! Our thanks for the ongoing support of the Warren Golf Club, who allow us to use their club track for access, and to their members for putting up with occasional interruptions to their game. Once the birds have been colour ringed, the work continues so thanks to Ivan Lakin and Lee Collins and the rest of the Dawlish Warren Recording Group for their important work on re-sighting, and for twinkling birds from Finger Point and the Island roost areas. This winter we hope increase the re-sighting effort with Lucy Hawkes' students from Exeter University, most of whom attended the catch.