A cannon-net attempt on the Taw-Torridge Estuary has been on the fieldwork agenda for DCWRG since shortly after its inception three years ago. As with the Exe, wintering waders in this estuary face increasing pressure from various sources. Hence, Natural England saw it as a priority for our collaborative study to gather data on the use of this estuary and surrounding landscape by Oystercatchers and Curlew. On top of giving us a comparison estuary to the Exe, it expands the DCWRG footprint, brings in a new cohort of contributing ringers, potential colour-mark resighters and raises public awareness about waders in Devon.

The Taw-Torridge is a far trickier estuary to work than the Exe due to the high tidal range, public access and key wader roost sites being unsuitable for catching. After identifying the Skern as a possible catch site, we arranged a catch for February 2020, but unfortunately, this catch was cancelled due to an incoming storm. The COVID-19 pandemic then prevented us from organising a follow-up attempt until Winter 2021. To make a successful catch at this site is a fantastic outcome for the group and our ongoing studies of the habitat use of Oystercatchers and Curlew using GPS-tracking. 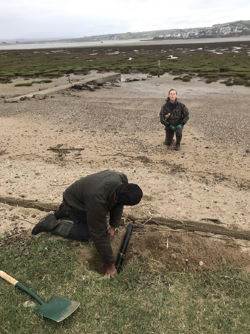 As the Skern is a new site, Lizzie Grayshon and Ryan Burrell were on site for a dawn recce on Friday 5th (6.41m @ 05:48). At first light, which was 50 minutes after high tide, a small group of 15 Curlew and 15 Oystercatchers were visible on the proposed catch site, with a further 50 Oystercatchers on the already exposed Saltmarsh, 40 Redshank below the sea wall and 150+ Brent Geese and Shelduck out on the water. 60+ Curlew were present on the pool behind the Skern, which joined the saltmarsh roost as it exposed. At first light, the following day (6th), with tide 10cm higher, Curlew, Dunlin, Oystercatchers, and Redshank could all be heard on the pool, with a large roost of Oystercatchers visible roosting at Crow Point as the beach and saltmarsh uncovered with the retreating tide, a similar-sized nucleus of birds formed on the beach.

After discussions, pacing out and marking, otherwise known as “cannon-netter dithering” to those without licences or training for them, the stage was set for a potentially nice falling tide catch and some successful outcomes. Later that afternoon, other team members joined, and three full wide nets were set on the beach above the last hightide line. This tide was 20cm higher or 2m up the beach than our intended catch tide. During this time, the team did a considerable amount of public engagement, with everyone being intrigued and supportive of the work we were doing.

On the morning of the 7th, Lizzie Grayshon, Robin Ward and Ryan Burrell were on-site at 05:30 for Lizzie and Robin to get into the firing position before the first light when they would be visible to the birds and for Ryan to start getting the team parked and organised. The rest of the team arrived at 06:00, and after a briefing on the site and cannon-netting by Ryan and Chris Dee, they were off to quietly get into position close by but out of view of the pool and beach roost. Of course, even with the best information in the world, the birds can still surprise you. In this case, at first light, Robin and Lizzie could see a nice nucleus of Curlew, Oystercatchers and Redshank on the beach. This behaviour change may have been due to stormy overnight conditions when waders are known to change roost sites. Robin and Lizzie were able to take a very nice catch on the rising tide after firing two nets. The team were at the nets within seconds, moving the nets ahead of the high tide mark and quickly deploying the covering material. Jodie Case did a brilliant job getting the keeping cages rapidly, allowing all birds to be immediately accommodated upon extraction. I commend the team on how effectively and efficiently this was performed. 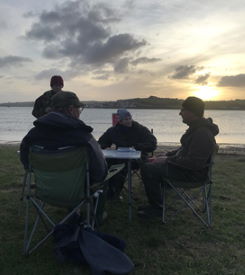 The processing team getting started 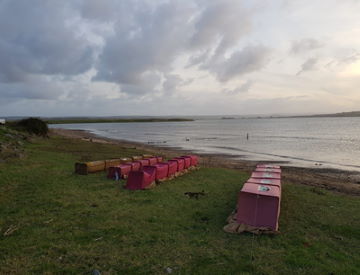 The keeping cages erected shortly after the catch 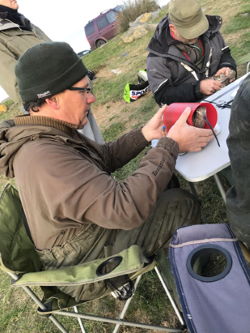 New DCWRG member, Mike Short weighing his first Curlew!Once all the birds were extracted and placed in keeping cages, processing teams were created by Lizzie, with a single team assigned to each of the following procedures: ringing, colour-ringing, measuring biometrics, photography of the individual birds, GPS tagging and feather sampling (for the purposes of sexing, using DNA). It was great to see Robin doing some lead processing after being relieved of his usual catch management role by Ryan and for Tim Frayling, our group chair, to continue his training to deploy GPS-tags. The processing of birds went smoothly, with birds quickly released.

It was an extremely successful catch and an appropriately sized catch for the group to fulfil our scientific objectives. To have fitted 16 Curlew within the Taw-Torridge estuary with GPS tags is a brilliant achievement and will provide a scientifically robust sample of Curlew movements in the estuary for the next 2-3 years. This species is a priority across Europe, so this data will be crucial to improving our understanding of winter needs and, therefore, its conservation. Alongside this, the colour-rings on target species will provide data on survival for the next decade. Further work will seek to achieve our objectives for Oystercatchers on the estuary as we seek funding for further GPS-tags and up to our colour-ringed sample for this species.

The DCWRG leaders would like to thank everyone involved in making this catch happen. Many DCWRG members, both new and old, travelled several hours and stayed overnight at their own expense to provide a team for this catch, so thanks to you all. A special thanks to Chris Dee for his many mornings conducting recces at the site, to Robin Ward for making the trip from Cambridge to provide a cannon-net licence holder and to Andrew Hoodless for travelling from near Basingstoke to provide additional people licenced to deploy our GPS tags. Thanks to Pete Potts and Farlington Ringing group for kindly lending us cannon-nets to use for this catch.

Thanks also to Micheal Day and the rest of the Torridge District Council warden team for granting permissions and access, to Jane Clark of Northam Town Council for liaising with the site graziers and to the Teignbridge Council team at Dawlish for allowing us to borrow waders for the group. Finally, an ongoing thanks to our project partners at Natural England, GWCT and the University of Exeter.

Thoughts on catch from Molly Brown

Molly is a new DCWRG member, a BTO C-permit holder, and this was her first cannon-net catch. She is currently on her BSc placement year with the Wetlands Dept at GWCT, one of DCWRG’s collaborating organisations.

I thoroughly enjoyed my first experience cannon netting. It surpassed all the expectations I had. It was great to learn from many experienced team members, every step the bird is taken through and why before being released: the ring, colour rings, ageing and biometrics. The variety in the catch provided brilliant handling experience, with the curlew feeling a lot bigger in the hand and very strong compared to the dunlin and redshank caught. Before the catch, I had never appreciated the size variation between male and female Curlew. The site at Skern was stunning, as the tide receded while we processed the birds; mud, channels and rocks were revealed, and a large flock of golden plover continued to move around the estuary searching for an invertebrate breakfast. It was a charming introduction to cannon netting, and I will certainly be coming again.

The fantastic team after releasing the last bird from 7 Nov 2021. The group consisted of DCWRG members, ecologists and researchers from 3 wildlife organisations, ecology students from two local universities and local BTO volunteers highlighting the broader benefits of DCWRG on partnerships and knowledge sharing. Photo kindly provided by Jodie Case.