In late December, a potential option for catching Curlew on the RSPB Exminster Marshes Reserve and surrounding wet fields was identified by WeBS counter James Diamond who covers that segment of the shore (thanks James!). Curlew and a mix of other wader had been coming up on to these fields at high tide, both during the day and at night. After work by Ryan Burrell and Tim Frayling in January, permission was secured for targeted mist-netting on RSPB Exminster Marshes and nearby fields from a private landowner to support our colour-ringing and GPS-tracking studies.

The objective of session on these holdings was to target Curlew to commence our fitting of the 10 GPS-GSM tags we secured through the Natural England grant. After inspection of moon phase and tides, recces by local DCWRG members and after discussion with other successful Curlew mist-netters, Ryan concluded that our best chance would be the end of February but that also an attempt could be made at the beginning of Feburary. Though the tides and moon phase and his availability to fit the GPS tags ruled out any catching taking place then. Due to an opening in Ryan’s schedule, the decision was made on the morning of Saturday 1 February to conduct a pilot session the following evening despite the unsuitable conditions of a bright moon and low high tide meaning catching was highly unlikely. 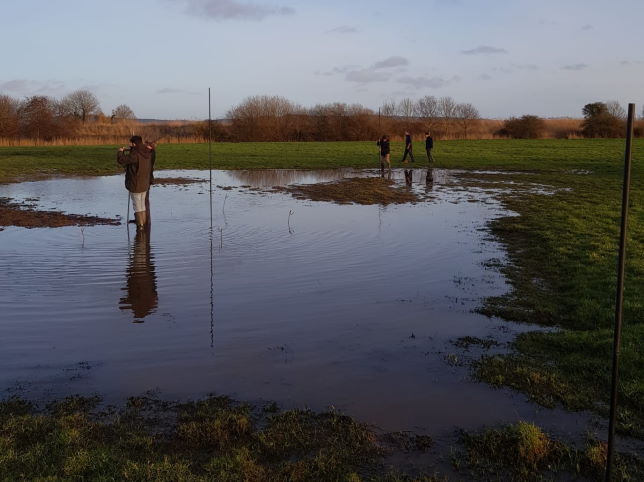 An hour or so after dusk, 2 Lapwing and a Woodcock were caught. This was a surprise, as the moon was still bright, and both these species are known to be good at identifying and avoiding nets. Several rounds later, in advance of high tide, a single Grey Plover was caught. As with the Lapwing and Woodcock before it, this was a very welcome first for the group, especially as we have a colour-ringing scheme registered for this species. Half an hour before high tide, when the team had all but given up hope that the Curlew were going to be pushed from the estuary by the tide, a flock of ~20 Curlew circled above the field and landed in the freshwater pools, 6 were caught and promptly extracted, during which time a further two Curlew and a single Grey Plover were caught. Five GPS-GSM tags were deployed on Curlew in total (3 Females and 2 Males), with the remainder held for winter 2020/21. These will record a fix every hour for potentially the next 2-3 years tags but unlike those which we have used on the Oystercatcher’s at Dawlish, transmit their data via the mobile phone network, approximately every 21 days.

This session was a really exciting development for the group and our projects, with a further session planned in late Feburary to fit further colour-marks. Thanks must go to the RSPB and David King for allowing us permission to operate on their land and for supporting the project to allow us to expand our knowledge of waders in the Exe Estuary.

On 17th December 2019 a team of 7 – Ryan Burrell, Chris Dee, Tamsin Quinn, Thomas Weston, Alys Perry, Robbie Phillips and Tim Frayling met at Dawlish in the afternoon to set three sets of mist nets near the island, the re-charge area and Finger Point. Once we had set the nets, half the team went to collect the chip order. During this time, the thermal scope came in handy identifying a bird in the net early – a Dunlin, which was colour ringed (with the code ‘AJ’ - see re-sighting history here). Although we were initially hopeful of catching many more, a fog descended which seemed to result in the birds being less willing to move around. We ended the evening with 6 new birds – 1 Dunlin, 3 Redshank and 2 Oystercatcher. Unfortunately, although Ryan was ready to deploy GPS tags if they were juveniles, typically both Oystercatchers were adults. 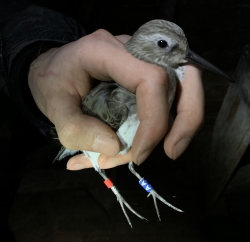 Dunlin colour-ringed on 16 Nov 2019 © A J BellamyThe 16th November brought another nocturnal suitable height spring tide (3.6m at 20:53) and with it our next mist-netting session. Conditions looked favourable with light cloud and no wind, so the team were hopeful for a useful catch despite the bright moon. The target for the mist-netting sessions of juvenile Oystercatchers remained, with 8 GPS-UHF tags still to deploy for winter 2019/20.

The team assembled at 1600, met by session leader Nik Ward who was suffering with the most non-existent streaming cold imaginable (get well soon Nik). Well 1600ish…all except Ryan Burrell and Thomas Weston who were 30 minutes late, though they were let them off as they had driven straight to Dawlish from the Solent via the DCWRG kit store, as they had been cannon-netting at dawn for a tracking study with Farlington Ringing Group and GWCT.

After the first two mist-netting sessions of the 2019/20 winter season were cancelled either due to weather or team availability, the group were keen to get out for the next session on the 4th October. Our successful Oystercatcher cannon-net catch on the 28th September had got the ball rolling on deploying the 2019 batch of Oystercatcher GPS-UHF tags, but as we did not catch a single juvenile bird of the 10 desired, this became our target for the evenings mist-netting.

The team of seven assembled before dark to set our nets around the island Oystercatcher roost at Dawlish Warren. The team included several regular attendees alongside new member Thomas Weston and one of our key colour-ring readers, Lee Collins. Once the nets were set, we waited for the tide to rise and bring to birds to roost.

Unfortunately, in terms of numbers the session was almost a blank, most likely due to the high level of ambient artificial light in the estuary that evening and moderate wind making the mist-nets more visible than desired. Fortunately, two positive events occurred, the first is that some of the team members managed to sneak off and bring back fish and chips, the second and far more important, is that the one bird caught was a juvenile Oystercatcher. Ryan Burrell, DCWRG Projects Officer, fitted this bird with a GPS-UHF tag, taking our 2019 sample to 11 (10 adults/sub-adults and 1 juvenile) allowing us to follow its progress, movements and site use over the next few years.

Thanks as always go to all those involved from DCWRG and Teignbridge Council and Warren Golf Club for their on-going support of DCWRG projects.

The use of mist-nets on high tides during the hours of darkness is less selective in which species are caught, but this technique provides us with  additional opportunities to catch and ring waders in the region. A mist-net catch can usually be managed with a smaller team and without the need for a specialist cannon net license holder or the preparatory work needed to reconnaisace precise roost sites and set cannon nets in advance of the planned catch tide.

Our focus on the Exe estuary is the wintering Oystercatcher population and this species is our primary target for mist-netting as we aim to catch birds flying into the high-tide roosts.