After a lot of behind-the-scenes organisation from the team leaders it was decided that we were going to go ahead with the second planned catching attempt for the 2021/22 season.

With a large team assembled we were able to catch 58 Oystercatchers, 28 Dunlin, 4 Grey Plover and 3 Ringed Plover. To further the study of how Oystercatcher are using the Exe Estuary, most were colour-ringed and a further five GPS tags were deployed. All the Dunlin and Grey Plover were also colour-ringed and we look forward to receiving reports of these birds over the forthcoming winter.

We arrived just after sunrise to see the oystercatchers at finger point (X) and on the north/east side of the bay (X). Unfortunately, neither of these are appropriate catching options as it would be tricky to get a large team into position without spooking the roost. There was also a nice flock or ~100 curlew spread out in bay two, the normal catch site (X), together with a flock of ~200 grey waders (dunlin, ringed plover, and grey plover) making use a small spit in the southern part of bay two. As high tide approached the curlew began to leave the site and head inland. It was decided that bay two was the best option for placing our nets as the grey waders made a useful nucleus to attract the oystercatchers if twinkling was required.

We moved position to the ‘catch position’ (X) as high tide approached, we were a little surprised to see how little beach was left exposed at high tide due to changes in topography. This is important to bear in mind for when choosing how high up the beach to set the nets. We waited a until over an hour after hide tide then went to inspect the beach and decide on what nets were best to set and where. After an hour on the beach, assessing tide hights and net pacing, we had a plan! 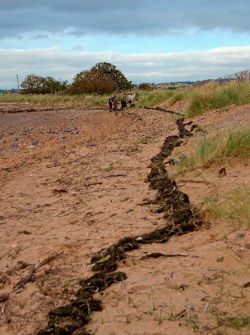 Nets set in bay two at Dawlish Warren © Andrew CarterA team of 9 met in the afternoon to set the nets for the catch, with the help from Steven Edwards (Teignbridge Council) and Andrew Carter who manged to take all the kit to the beach in their vehicles.

We set two half nets and two full nets in bay two (x), this covered the most part of the bay and gave us several options for the morning depending on where the birds ended up. The nets were set high up the beach to allow for the higher tide predicted that evening and the tide line was moved to disguise the nets.

The team met at 6am at Dawlish Warren carpark.

Robin and Lizzie left promptly to get into the catching position, while Nik and Tim organised the rest of the team, gave a briefing of what to expect on the catch and then got the team into position.

Everyone was in position at first light, and we were able to begin to see where the birds were across the warren. 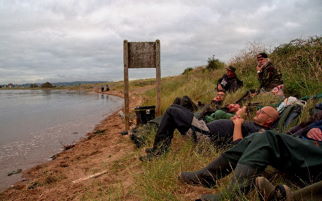 The team waiting for the catch © Andrew Carter The tide was still quite far out, and the oystercatchers were again spread between finger point (X) and on the north/east side of the bay (X). It was now a waiting game for the tide to come in and see where the birds decided to roost. As the tide began to come in, a nucleus of grey waders began to form in front of the nets in bay two (X). Once the tide reached the 8-yard markers (where we expect to catch to), we decided it was time to start twinkling the oystercatchers to try and get them to move to bay two. A combined twinkling effort from Lee at the hide, Kevin on the far Northern side of the Warren and Amelia at Finger Point, we manged to get a nice flock of ~200 oystercatchers in bay two. Unfortunately, the birds were so far up the beach that we were no longer safe to fire any nets, so we then had to wait until the tide began to fall and hoped the birds would move down the beach again. Luckily this was exactly what they did, and Robin and Lizzie were able to make a very nice catch on the falling tide, firing the two half nets centred upon the shallow spit.

The team all got to the net quickly to lift both nets that had as expected gone ~10 yards into the water, up the beach and out of the water. Keeping cages were put up very quickly, allowing all birds to be immediately accommodated upon extraction. Birds were sorted by species and, for oystercatcher, by being colour-ringed or not. 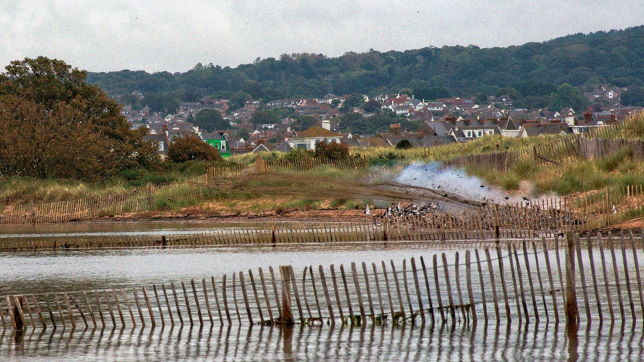 Once all the birds were extracted and placed in keeping cages, processing teams were created by Lizzie, with a single team assigned to each of the following procedures: ringing, colour ringing, measuring biometrics (including extra bill measurements), photography of the individual birds, GPS tagging and feather sampling (for the purposes of sexing, using DNA).

The processing of birds went smoothly which with the catch size, enabled all catch objectives to be achieved i.e., colour-ringing a sample of 50 Oystercatchers (in fact all 58 birds departed with colour-rings), deployment of the five remaining GPS tags for Oystercatchers and the feather sampling of 25 Oystercatchers.

The catch also provided a great opportunity for the training of several ringers inexperienced with the ringing and ageing of the four species of waders caught, helped hugely by the trainers present.

The whole catch was ringed, processed and released within 3.5 hours. It was an extremely successful catch, with an appropriately sized catch for the group to fulfil the objectives of the catch. A massive thank you to all involved in organising, net setting and the catching team, and of course it wouldn’t be possible without the local birders who provide the invaluable local knowledge and the huge amount of colour ring re-sightings!

We also wish to extend a special thanks to the Steve, Stephen, and Phil of Teignbridge Council for allowing us to access the site, help with kit and for providing waders to team members who needed them. Thanks also go to Devon Wildlife Trust and the Warren Golf Club for allowing our continued access to the site.